Hey LJ, sorry I've been neglecting you. Haven't even really been signing on as much. Got a lot going on in my life. (And apparently, doing so caused an unexpected unfriending after that person left a mean comment to someone else in one of my entries...LJ Drama whoo...)

And there you have it. Have a Merry Christmas and see you next year!

Hey guys, just wanted to point you guys to MISSION: Pwning For A Cure - a charity event benefiting the Leukemia and Lymphoma Society and put on by Alpharetta-based video game developers Hi-Rez Studios.

They're showing off their upcoming Action MMO game Global Agenda for the first time to the public, as well as having game development seminars and raffles featuring a Sony PSP and an iPod Nano. It's on Saturday (Tomorrow!) from Noon-5PM and admission is free.

It's at a place called the Computer ArenA in Roswell, right next door to the Hi-Fi Buys on Hwy 9 at Mansell Road. It's actually a really cool LAN gaming center that also has Wii's, Rock Band, and a Stepmania cabinet for the DDR people. It also has good food and BEER that is very nicely priced. (And it's good beer too, they have Sweetwater and Terrapin there.) If you're into gaming and can't make it out tomorrow, I think you should still check out the place sometime. They'd love your business, and their prices are VERY reasonable since they're trying to price it for college kids.

(Full disclosure: I don't work for Hi-Rez or Computer ArenA, but I am broadcasting on All Games Radio for the last two hours of the event.)

He wasn't my candidate, but he's going to be my president. (Unlike some people, I support the president of the opposing party if they get elected.)

So here's a gift for all of you:

I know today is an important day and all that...But, honestly, I think you should Command & Conquer This Life!

The recent Xbox Live Arcade release of Beat'n Groovy really is just a stripped down Pop'n Music - even has Starmine in it. Unfortunately, instead of 5 and 9 button, you have 3 and 5 button, and I haven't found a way to speed up the note chart.

The ranked leaderboard is filled with Japanese gamertags though, they've really embraced it.

I know I haven't written here in a while. I've been kinda preoccupied.

I attended the Penny Arcade Expo on the same weekend as Dragon*con and broadcasted 8 hours of live radio from the convention center. Lots of money and time went into this, and I'm proud of the results. (Unfortunately, due to my crappy hotel, the t-shirts we made specifically for the event were withheld from me even though I asked for them every day, but that's another battle for another day and I'm trying to not let it overshadow the other stuff.)

This project also has let me get back into video editing. I haven't done any video editing in quite a while - until now. Behold, my meager editing skills...An interview with the President of NetDevil about Jumpgate Evolution!

So it's amazing to me what happens with our senses when they're being deprived of for so long.

Anyway, here's a recent picture of me. These don't happen often, so mark it down on your calendar! (You can click it to make it bigger) 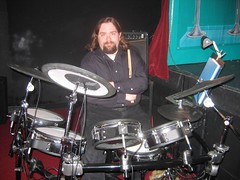 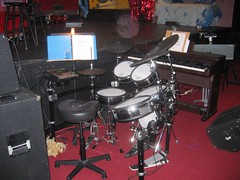 My Roland TD-20-S Setup at Nunsense, Rosewater Theatre, Roswell GA
Originally uploaded by blackwolfga.
I've been doing my first paying musical gig where I wasn't subbing for someone else all month. The play is called Nunsense, and it's being put on by the Rosewater Theatre. (Careful, there is music on that page that you can't turn off.) We have two more performances - tonight and tomorrow night, and then we close. It's been an interesting experience, and it sounds like I may be hired for future productions around this area.

This is why I haven't been around all that much...I have had very little free time all month.

Hope things are going well with you all. I celebrated the second anniversary of my 29th birthday this month, and also got burnt out on some other things that I enjoy. But if you read other blogs online, you would have thought that I died.
Collapse